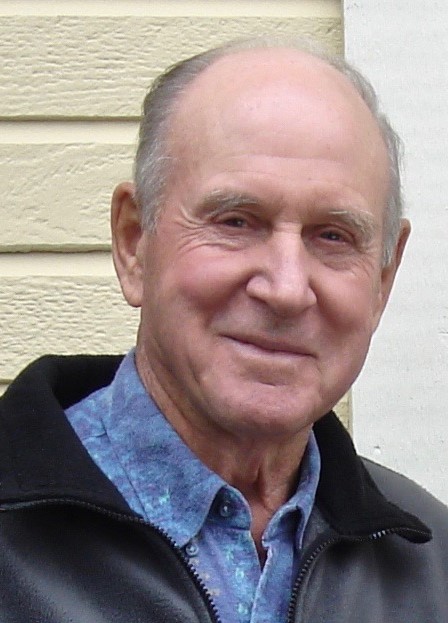 We regret to announce that Dale A. Henning passed away on Wednesday, May 15, 2019, at his retirement home in Bellingham, WA, at the age of 94. He suffered from increased memory loss over the past year. Above all else, Dale was devoted to his wife and family, who loved him greatly. His generosity and dedication were extraordinary; he offered immeasurable time and support when friends were in need. His smile and laughter were contagious, and his playful demeanor brought warmth and joy to his community of family, friends and colleagues.  His very favorite pastime was telling jokes and stories to make other people laugh. Even newly-made acquaintances were entertained by one joke after another and comical tales from his travels. The more he could make someone roll their eyes and giggle, the happier he was!

Dale was born and raised in Hillsboro, North Dakota, and spoke of his hometown with pride and affection throughout his life. On graduating from high school in 1943, he joined the Navy, underwent officer training in Philadelphia for a year, then went on active duty in 1945.  His ship, the USS Buckley, was sailing for Japan when the war ended, discharging him in Florida. He was briefly married to Mary Dorothy Myers for a couple of years beginning in 1946, during which time he had his first daughter, Jackie.

On the GI Bill, Dale completed his MBA at the Wharton School and then his PhD at the University of Illinois at Champaign-Urbana, landing at the University of Washington School of Business in Seattle in 1955.  There he served as Professor of Administrative Theory and Organizational Behavior for 43 years until 1998.  With his fellow professors, principally Harry R. Knudson and Robert T. Woodworth, he consulted and conducted management-training seminars for firms and governments in the United States and around the world.

He met his wife of nearly 67 years, Joan Elizabeth Ross, while teaching at the University of Illinois. He swept her off her feet, and ultimately off the stage, where she was singing and dancing in a musical production. They were married in July of 1952 and spent their rather unconventional honeymoon at the Roosevelt Library in Hyde Park, New York. They were assistant researchers for a book on the presidency of Franklin D. Roosevelt that was ultimately published in a 3-volume set.

He and Joan lived in Shoreline, WA, for nearly 51 years until just recently. They were avid travelers, spending the year 1954-55 in Norway, 1957-58 in Brazil, and 1969-70 in Britain while he taught at the London Business School, among many other stints abroad which included 6 major continents.  Their three children, son Randy and daughters Leslie and Nancy, learned how to travel at an early age.

Accomplishments of which he was especially proud include helping to set up the Getulio Vargas Foundation School of Business Administration in Sao Paulo, Brazil; consulting for the State of Hawaii, U.S. Army forces in Germany, and the governments of Samoa and the Federated States of Micronesia; multiple seminars for the University of Tehran in the 1970s; helping to establish Romania’s first business school after the fall of communism in Bucharest; developing the UW Executive MBA Program, where he served as interim director in the 1990s; serving as president of the Western Academy of Management.  He was particularly proud to have supported the UW Husky Football program, for which he spent several years helping to recruit players. In addition to this, he and Joan were Husky football season ticket holders for 63 years. Truly a point of pride!

He and Joan learned to ski in Norway in 1955, after which he continued skiing until the age of 93.  Skiing became their way of family vacations – at least when they were not going to Maui – a tradition that was continued with the arrival of the third generation and extended families.  He and Joan bicycled across the state of North Dakota to his 50th high school reunion in 1993.  Scornful of golf in middle age, he became an avid player after golfing for the first time on his 75th birthday and spent six weeks each winter with Joan in Palm Springs.

Among his secrets to a long, happy life were:  stay physically active, compliment and be present for your wife and children, be there for others when they need a friend and advocate, make your friends ski and golf with you, stay positive,  make younger friends, tell stories and laugh with everyone you meet, eat pastry in the afternoon, and drink cocktails at sunset.  He truly believed that spreading smiles and friendly greetings to others helped brighten another person’s day. As he aged, this became his mission. Spreading this happiness to his neighbors on his daily walks with Joan, trimming bushes and mowing the lawn at the house in Shoreline extended his lifespan by several years.

To order memorial trees or send flowers to the family in memory of Dale A. Henning, please visit our flower store.