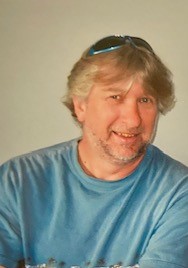 Dale Madison Henifin, age 57, passed away in Bellingham Thursday, April 23, 2020. He was a lifetime Whatcom County resident. Dale was born on November 12, 1962 to Bob A. and Myrna L. (Fullner) Henifin. He was the youngest of the four children and attended Mt. Baker Schools.

Dale was a hard worker, he enjoyed sawing and splitting wood. He loved his roses, his cats and especially his dog, Mugsy. He enjoyed his many trips to Hawaii, his ’69 Camaro SS, and playing pool, foosball, darts and watching televised NASCAR races. He had a contagious laugh, a big heart and loved a good meal. He will be missed.

Dale was preceded in death by his mother, Myrna L. Henifin, brother Shane Henifin and his grandparents.

A private family service will be held at a later date.

To order memorial trees or send flowers to the family in memory of Dale Madison Henifin, please visit our flower store.
Send a Sympathy Card