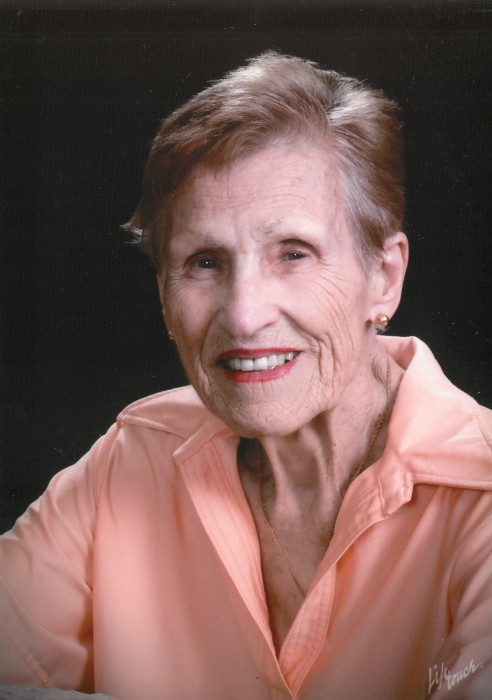 Cynthiann Martha Campanale was born to William and Lela (Walker) McCaslin in Zeraphath, New Jersey.  She spent most of her youth between Colorado and Southern California as a member of the Pillar of Fire church.

At age 19, she struck out on her own, lived at a boarding house in Los Angeles and made lifelong friends.  She worked at the Telephone Company.  Her transportation to work was the city bus and there she met her future husband, Albert Campanale who was traveling to college at USC on the GI Bill.  They married September 7, 1947.  After a short while in their apartment, they moved in with Al’s family in Hollywood, CA.  In 1951, they welcomed their daughter, Susan Ann.

Life in extended Italian family (parents, two aunts, nephew and semi-annual visits from another brother and family from Chicago) could lovingly be described as living in a screwball comedy.  Even though Al worked three jobs, their social life was very full and Mom enjoyed her time as a member of the Italian Women’s Club.  There were Church activities, dances, weekly card games and  Phil, who rented a room from the neighbor and who shared dinner every evening with us.  Joni, a co-worker of Mary’s moved in for a couple of years as well. Mom had the family she always wanted.

When Pa suffered a series of strokes, she willingly took on sharing the caretaking with Aunt Mary, and Bernice, the family housekeeper. By 1961, Ma, Aunt Ellen( Babe), Pa and Aunt Kay ( Chicago Uncle Jim’s wife) had passed away.  Nephew Wally had married and started his family and Aunt Mary returned to Chicago to help raise Jim & Kay’s two sons, Jimmy & Randy…and then there were three.

Al, Cynthia and Sue then moved to Van Nuys, in the San Fernando Valley and made friends and socialized.  Cynthia had not finished High School and returned to night school at Van Nuys High and graduated the same year as Sue in 1969. She went on to Junior College in the hopes of becoming and LVN, but other things in life got in the way. In the late 70’s, Al & Cynthia moved to Simi Valley.  Mom loved life there.

When Al retired from Sears, they relocated to Las Vegas where the “Chicago contingency” had set up shop in the late 60’s.  Once again they were very social.  As Al was a Knight of Columbus, Mom joined the “Lady Knights” and made fast friends.  They travelled extensively though the Southwest with their Senior Group as well as cruises to the Caribbean, Alaska, Mexico, Italy and the Panama Canal passage.  Holidays and visits were spent with family in CA or we traveled to Las Vegas.  The family was close.

In 1989, Mom achieved her lifelong dream – she converted to Catholicism and her soul was at home.  Her faith remained strong for the rest of her life.

In 1996, Al’s daughter, Ellen, from a previous marriage entered our lives along with her husband (Jim) and her five children.  They live in St. John Indiana.  All were welcomed as if they were always there.  The family was complete.

Dad was 10 years older than Cynthia.  Jim and Mary were older still.  As their health declined, Mom once again took on caretaking – first assisting Mary with Jim and then with Al and for a while Mary.

After Dad passed in 2008, it became apparent that Mom shouldn’t live alone and her friend Sandy moved in.  They enjoyed each other’s exploits and especially being Eucharistic Ministers.  Good neighbors kept watch on them both and we increased our visits along with nightly phone calls. Aunt Mary passed away in 2009.

When Jim and Sue moved to Lynden, Washington in 2014, they arranged the sale of the Las Vegas home and moved her here.  Family from Las Vegas visited here and were amazed at the lushness and beauty of our community.

Cynthia was stronger than she realized – overcoming two operations in her 30’s, cancer in her 80’s and a fractured femur in her 90’s.  She overcame much adversity in life.  Her talent in flower arranging, crafting and love of music made life that much sweeter.  She loved animals, nature, telling jokes, reading “Seabiscuit “and her family and her dog, Buddy.  Most of all, she’ll be remembered for her gorgeous smile.

She chose Meadow Greens Retirement Community and lived for a short while in Independent Living before transferring to Assisted Care.  God blessed her decision so as her care was professional, compassionate and always with dignity.  Hospice was called in last April and their assistance in smoothing out this final journey’s path is so appreciated. Her decline continued and Fr. Francisco anointed her on July 11th.  Hospice estimated her passing as July 14, but she was stronger than anyone believe.  We were give ta week longer of blessings, Rosaries, sending forth, thanksgiving, forgiving and again, leave-takings.  Nothing was left unsaid or unfelt.

When safe to travel, Mom’s final trip will be back to Las Vegas where she’ll be interned next to Al.

And she‘s Living happily Ever After.

To order memorial trees or send flowers to the family in memory of Cynthiann Martha Campanale, please visit our flower store.