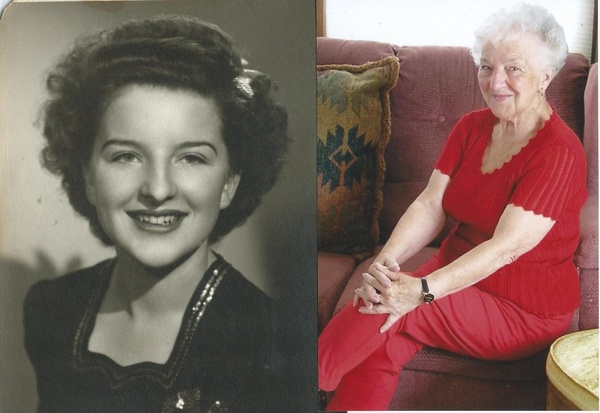 Beatrice Lorraine Jacobson passed away in her care facility, The Bellingham at Orchards, in the early morning hours of Oct. 13th  2016 with her daughter by her side. Bea was born Dec. 3rd 1926, in Glendale California to her parents Harold and Mae Kovar. She was born a twin and weighed less that 2lbs, her twin brother did not survive. Doctors told her family that she would not survive either but her mother and grandmother swaddled her, kept her warm by the stove, and fed her with an eyedropper until she was able to drink milk out of a bottle. She proved the doctors wrong with her feisty fighting spirit, (which she definitely kept throughout her life!)

Bea, or BB as close friends called her, grew up in Gardena California and loved living in southern California as a child. She loved the sun, beaches, the Rose Bowl Parade and saw Frank Sinatra perform at the Hollywood Bowl!  She dearly loved her Grandma and Grandpa Horak, who were immigrants from Czechoslovakia, and was taught to dance at an early age by her Grandpa. She loved to dance and perform for people on the sidewalks when she was a little girl. Her parents divorced when she was very young and after a few years her mother married Jack Murray from Washington state. Soon her mom had a baby boy and named him Jack Murray Jr. Bea was 10 years older than her brother. The family moved to Washington after she graduated from high school. Her father Jack owned a Western Auto store in Bellingham and Bea worked there as well as JC Pennys.

Bea met the love of her life, Bob Jacobson, when she was introduced to him by her best friend Marge Rick, who she worked with at JC Pennys. Bob was a local boy and his best friend was Willie Rick who just happened to be married to Margie! Bob grew up on the Kelly road, one of six children and had recently returned from serving his country during WW2. They were married in Bellingham on February 9th 1947 and had 50 wonderful years together.

Their son Bob Jr. was born in 1951, followed by daughter Kim in 1956. They moved to a new development on Cliffside drive in 1957 where they raised their children and lived until Bob passed away. It was a close-knit community and many lifetime friendships were forged. Bea loved to cook and host holiday gatherings with family and friends. Dancing continued to be something she and Bob enjoyed their whole lives as members of the Elks and the Bellingham Country Club.  They had many dear friends with whom they fished, camped, traveled, and partied with. Some of the trips taken were to Tahiti, Hawaii, Mexico, Las Vegas, Reno, with the highlight being a trip to Africa to visit family.

Bea was always ready to play any game, be it cards, darts, or golfing, and was in a bowling league for many years. She was a volunteer for 25+ years at St. Joseph hospital. She was an artist, seamstress and crafter and always had a patio full of beautiful flowers every summer. She was  very fashionable from head to toe, and always had a scarf or fancy jewelry to accessorize  her outfits. Her favorite color was blue with pink being a close second,” because everyone looks good in pink!”

She was a wonderful Grandma to her two beloved grandsons and spent a lot of time babysitting, making special goodies to eat and spending time with them at the beach where she lived. After her husband passed away in 1997, Bea traveled to Hong Kong, and many Mariner’s spring training games with friends and had a good buddy named Bill Brooks to play cards with, bowl with, and cook for. Bill became a part of family gatherings and we were grateful for the companionship he provided for her.

In 2009 Bea moved to Woodway Senior Living after selling her home to her grandson and his family. She loved it at the Woodway and lived there for 6 and a half years until she had a stroke in late 2015. After two hospitalizations, she was unable to return to the Woodway and lived the rest of her life at The Bellingham at Orchard. The family is so thankful for the loving care given to her in her final years.

Preceded in death by her grandparents, her parents, her husband Bob, and an infant son, she is survived by her children: Bob and wife Mary, Kim and husband Kevin Goertz, grandsons Jacob Goertz and his wife Rachel, Joshua Goertz and his wife Yaprak, and great grandsons Jayden and Mason Goertz. Also survived by her brother Jack Murray and wife Jill and their families in Montana, beloved sister in-law Patty Jacobson and her family, and half-sister Maribeth Tooke and husband Jon and their family in Chicago,and many cousins, nieces and nephews  from California to Washington. A memorial service for Beatrice will be at 2:00 on Saturday, November 12, 2016 at the Elk's Lodge #194, 710 Samish Way, Bellingham, WA 98226.

To order memorial trees or send flowers to the family in memory of Beatrice Lorraine Jacobson, please visit our flower store.