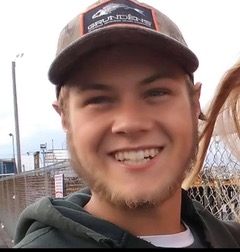 Balyn Pierce Jacoby was born on August 16, 1997 in Bozeman, MT to Jason and Heidi (Linderman) Jacoby. He attended Mount Baker High School and proceeded to learn the trades of logging and commercial fishing. Adored by friends and family, Balyn was known to bring energy to a room with his infectious laugh and smile. He had an unwavering sense of himself and his values and was not afraid to show his brave and daring side to anyone.

Balyn was an adventurous spirit. Much of his early childhood weekends were spent courageously ski racing down mountain slopes. For many years he was actively a part of the Mount Baker Race Team. He was famously known for his cheetah print racing helmet of which exemplified his bold and carefree spirit. His childhood was shared with his siblings, Brennen & Bridger, and they shared inseparable bonds filled with an unshakeable amount of love for one another and the outdoors.

His young adulthood years were spent either in the woods logging or on a boat in the open seas. He learned the skillful trade of logging from his uncle Frank and 3CS Timber Cutting. An immense amount of contentment was found working in the woods and he was known for his hard work ethic. When he wasn’t in the woods, he took to commercial fishing and was proud of the time spent on the Washington & California seas practicing a difficult, persistent, and systematic type of work. He was a part of an elite fishing crew and was known by all for his ambition to learn. Balyn was also an extremely talented baseball and football athlete, enjoyed working mechanically on trucks and cars, and playing/writing music.

Balyn is survived by his parents, Jason and Heidi Jacoby; siblings, Brennen (Caitlin) and Bridger Jo; grandparents, Larry & Diane Jacoby, Joe & Gloria Linderman; aunts and uncles, Angela (Frank) Cain, Amy (Rob) Brandland, Jill (Laura) Jacoby, Kirk (Dana) Linderman, and Keith (Jeri) Linderman; and many cousins, Michael (Julia), Shara (Joshua), Kendal (Cayley), Megan, Conner, Alyssa, Seth, Emily, Carson (Elena), Hayden, Taylor, and Monique. He was so deeply loved and there is a void in our hearts that will never be filled. At this time there will not be a public memorial service.

To order memorial trees or send flowers to the family in memory of Balyn Pierce Jacoby, please visit our flower store.
Send a Sympathy Card