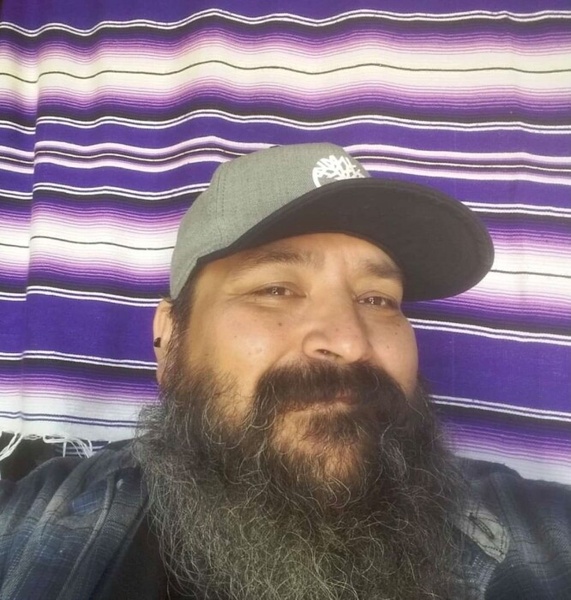 Antonio Gonzalez, 49, beloved husband, father, son and brother went to be in the presence of his Lord and Savior on August 18, 2021 after an unexpected illness. Born November 15, 1971 in Sunnyside, WA, to Carlos and Pam Gonzalez he spent most of childhood years growing up in the Yakima Valley which later would influence his artwork. He grew up on the family farm, surrounded by numerous cousins, working in the field driving tractor, picking fruit, and exploring the Valley that he loved.

Tony later moved to Yakima, WA where he met his wife Twilight. The moment he saw Twilight, he knew he was going to marry her. He and Twilight married on April 12, 1997. They later moved to Bellingham, WA which they called their home with their four children, for almost 25 years. Tony had a love for antique toys and vintage items. He spent many years, and made numerous friends, through antiquing. He called himself JunkMonk316 because John 3:16 was his favorite verse: “For God so loved the world that He gave His only begotten Son, that whoever believes in Him should not perish but have everlasting life.”

Tony was a gifted and passionate artist. He artwork often reflects images from his childhood in the Yakima Valley. He painted many pictures for family, murals for the community, a mural at an Orphanage in Mexico, and had numerous shows both locally and in the Puget Sound area. Prior to his passing, Tony was working on his new show at the Jansen Art Center in Lynden, WA. On September 2nd, his show “From Then ‘till Now” will feature works spanning two decades.

Tony loved his family. He spent many coffee dates with his wife. He would fish with his two younger children, Juliet and Little T, almost every Saturday morning. His two older daughters, Lilac and Naomi, are also artists and displayed their work next to his at many shows. Family was important to Tony, and he spent almost every Sunday with his siblings having Sunday dinner at Grandpa and Grandma’s house. His children will especially miss their daddy’s hugs, fishing trips, garage sales, adventurous spirit, and his spiritual leadership.

Most importantly, Tony loved Jesus. He shared the message of Christ’s forgiveness and love with everyone. He faithfully led many early morning men’s Bible studies, taught Sunday School and hosted a young adults ministry. In his everyday life, his constantly shared a message of hope in Christ with those he encountered. He fully believed that death was not the end.

He is survived by his wife of 24 years, Twilight (Burchell) and his four children Lilac (Josiah), Naomi, Juliet, and Tony. Also surviving are his parents Carlos and Pam, three siblings James (Stephanie), Jason (Teresa), Sarah (Seth), nephews and nieces. A private service will be held at the Enterprise Cemetery Ferndale. A public Celebration of Life service will be held August 27, 2021 at 2:00pm at Calvary Chapel Northwest 6015 Guide Meridian, Bellingham, WA.

To order memorial trees or send flowers to the family in memory of Antonio "Tony" Gonzalez, please visit our flower store.