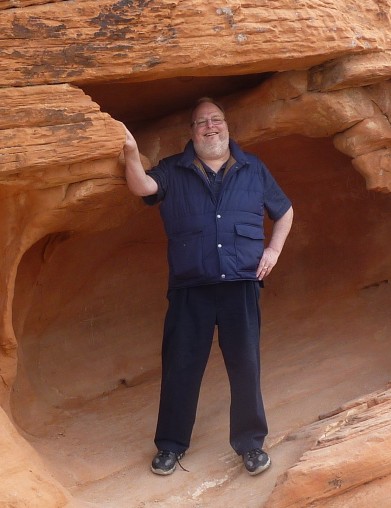 Allen "Al" Lloyd Ebsch was born on February 14, 1965 in Mountain Home Idaho. He passed away at home surrounded by his wife Susan and his dog Whitney on March 12, 2018 after a very courageous battle with cancer.  Al is survived by his wife Susan Ebsch (Radonski-Anglada), his brother Gary Ebsch and wife Barb of Parrottsville, TN, his sister Teresa Ebsch and brother James Ebsch of Yuma AZ, along with numerous nieces and nephews. He also leaves behind his sweet Golden Retriever, Whitney, who never left his side during his illness. Preceding him in death was his brother Michael Ebsch, his parents Allan and Patricia Ebsch and his beloved Shiba Inu dogs, Sam and Suki.

Al grew up in an Air force Family. He was born in Idaho and shortly thereafter his family moved to Iran until Al was six years old.  They returned from Iran, settling in Yuma, Arizona.  Al graduated from Yuma High School, attended Arizona Western Community College in Yuma and then joined the Navy in July of 1984.     While in the Navy he attended and graduated from Chapman University with a pair of BSBAs, one in Accounting, the other in Business Management.  His first tour in the Navy was in Boston, MA and his second tour brought him to Whidbey Island.  Al fell in love with the Pacific NorthWest and he never left.  After retiring from the Navy, Al spent several years working as a software project manager for Wall Data and Dealer Information Systems in Bellingham, WA.  The last few years he worked for Industrial Supply in Bellingham, WA  and was very thankful for the many friendships that developed while he was there. Al had a zest for life and all it had to offer.  He loved good food, IPA beer, traveling, camping, hiking, chasing waterfalls, his dogs, his dahlias, blues music and considered himself an armchair astrophysicist.  Al will be greatly missed by all who knew him.

We are so thankful for the kindness that was offered by the Bellingham Cancer Center, Whatcom Hospice and all of his friends and family that showed their unconditional love during the last five months of his life while he was courageously battling cancer.

A celebration of life with military honors will be held at Northside Community Church on Saturday, March 24 at 11:00 a.m.  A light lunch will be served following the service. In lieu of flowers, please consider donating to Whatcom Hospice in Al’s memory.

To order memorial trees or send flowers to the family in memory of Allen "Al" Lloyd Ebsch, please visit our flower store.