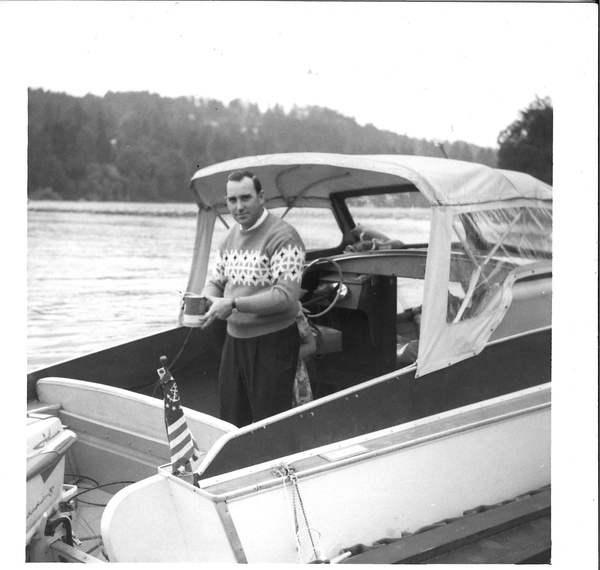 Alexander Sinclair Holmes, legally Alexander St Clair, because the nurse couldn't understand his mother's Scottish brogue, died at home, just as he had wished, at the age of 96.

Alex, fondly known to his family as Lexie, was born November 20, 1925, to Agnes and John Holmes in Highland Park, Michigan.

Being born to immigrant parents who were trying to get their footing in America and living his formative years during the Great Depression left him with some proclivities that stayed with him throughout life: sneaking into events and theaters (sometimes donning disguises to look official), a love of collecting things, including, but not limited to cars, model cars, toys, pictures of all things Western, and books about presidents (especially Abe Lincoln), movie stars, baseball cards, and tips on staying young. He dubbed his house the "museum" and delighted in giving family tours. He also had a habit of bringing home animals starting young, with pigeons his parents discovered when a neighbor informed them a coup holding the birds had been built on his garage. Later, a bull named Hercules and a rooster named Wildfire that terrified the entire household. In addition to his penchant for animal husbandry, he was modern Johnny Appleseed, planting trees wherever he settled, leaving forests behind.

Like many young men of his generation, he left high school at 17 and joined the Navy. He served in the Asiatic Pacific American Theatre and was honorably discharged in 1946 as a Pharmacist's Mate Second Class. For a hazard payment of $50.00 a month, he worked aboard the USS Bayfield, the second flagship in Operation Crossroads, the first atomic bomb test in the Bikini Atolls. With the extra cash, he helped his parents buy their first home. He later continued a Naval Training course at Highland Park Junior College to achieve Pharmacist's Mate Third Class.

Once, reminiscing about his experience in WWII, he revealed to his delighted grandchildren that his shipmates nicknamed him 'Drifty' because he frequently drifted out of his hammock. To his chagrin, the name stuck, and most future correspondences were addressed according

After leaving the Navy, he went to work as lab technician at St. Lawrence Hospital in Lansing, Michigan and there met a beautiful and brilliant nurse Signe Samuelsen, who would become his life's partner. With nursing jobs previously arranged, Sig, her sister Martha and close friend Maxine moved to Lansing in the Spring of 1953. Shortly after her arrival, Signe spotted Alex in his lab coat while filling out paperwork. Signe cleverly arrived at a lab early each day to wait for Alex's arrival. Eventually, her strategy got his attention and led to a connection that was love at first sight.

They married in June of 1954, and shortly after moved into their first home, built from a Sears kit with the help of kind neighbors who quickly realized this new kid on the block had plenty of dreams but lacked any skill when it came to construction. Their first three children, Carol, John, and Gina came home to that tiny cottage. Two more moves and another daughter (Andrea) later, the family made a big move West; to Oregon to expand the territory for Meyer Labs, the company he then worked for. He set out before the family to secure a home but due to propensities mentioned above, quickly depleted the carefully saved down payment by buying a horse, a dog, a cat, and a boat before purchasing the said house. Sig never let him forget that. Well, that and voting for Richard Nixon.

They settled into life in Jennings Lodge, Oregon where they lived on an idyllic tree-lined street that ended at the Willamette. There, they welcomed their fifth and final child, James. A few years later, they moved to Bothell, Meyer Labs sold to Glaxo Smith Kline, and the family and Dad settled in for the rest of his days.

Dad loved people. He would talk to anyone about anything. He would tell the same story, with new embellishments, over and over, thereby establishing a colorful family history. He loved to laugh, especially at his own jokes. Although the jokes weren't always funny, his infectious chuckling had everyone joining in till they cried. He was a consummate prankster, once convincing neighbors with an official-looking letter that they would be taking delivery of a live buffalo from the government. He would drive miles and miles to see a parade or attend a state fair or a rodeo. He took his family on many camping, fishing, and boating trips that never failed to turn into an adventure because his many old vehicles constantly broke down.

More than anything, he loved his family, both his own and Signe's in Cashmere, having landed in a clan that made him their own. He loved who they were and their stories, delighting in taking pictures and films of them. To the end, his walls were covered with their faces and the cards they had written him. His loved ones were his greatest treasure.

He was preceded in death by his loving wife of 42 years Signe, Beloved, and only sibling James McArthur Holmes, parents, and granddaughter, Jesse Schuette.

A private family graveside services will be held at Bayview Cemetery in Bellingham, Washington with Military Honors.

To order memorial trees or send flowers to the family in memory of Alexander Sinclair Holmes, please visit our flower store.