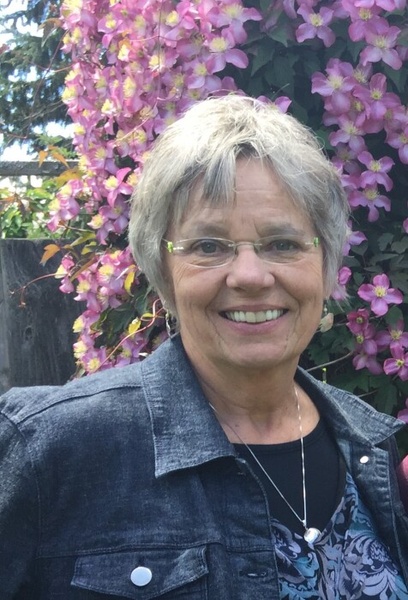 Ali passed to her heavenly home Friday, October 22, 2021 after an 11 month battle with ALS. The oldest of 4 siblings, she was born in the Netherlands on December 23, 1949 to Geert and Jantina Doesburg and immigrated to the U.S. with her family in 1958. Initially settling in Everett, WA, the family soon moved to Mount Vernon, WA where Ali's father had purchased City Bakery. As a teenager Ali was soon employed at the bakery. Tragedy struck in January, 1965, when her father passed at age 47, leaving her mother to run the bakery and raise four children. Being the oldest meant assuming many household duties at age 15. Christian education was important to the family so Ali and other high school aged youth from Mount Vernon car-pooled to Lynden to attend Lynden Christian High as sophomores in 1965. Throughout her school years, Ali sang in choirs. In elementary school she was part of the Mount Vernon Christian Choraliers – a singing group that gave performances throughout the state. In high school she again participated in choir. If she had to stay after school for an evening performance, she needed to find a place to have dinner. Having become friends with the Klaas Laninga family of Lynden soon after their arrival in 1958, she often found a place at their dinner table. And that's how she met Herman. Before long they started dating and on July 29, 1969 they were married and made Bellingham, WA their home.

Ali was soon employed at Smith's Bakery when the owner learned she was a baker's daughter and knew her way around a bakery. She became a stay-at-home mom when her three children were born. Once the children were all in school she re-entered the work force. She served as receptionist for 10 years at the Bethany Christian Services adoption agency. After that she was employed in various medical offices, ending her career at Peace Health's Center for Senior Health. Ali continued to find joy in singing. She joined the Whatcom Chorale in 1974 and sang until the Covid-19 Pandemic forced the group to stop in 2020. Ali was an active and giving person. Besides her involvement at Hope In Christ Church on Praise Teams and choirs, she also served as a Sunday School teacher and a Deacon. She volunteered for many years at the Bellingham Food Bank, helped serve at the annual Lighthouse Mission Thanksgiving dinner and served the homeless at the annual Project Connect day at Bellingham High. She also coordinated her church's involvement in Family Promise, an Interfaith Program designed to get families off the street and into housing and jobs.

A celebration of life is planned for Saturday, November 27 at 2:00 PM at Hope In Christ Church, 710 E. Sunset Drive, Bellingham, WA 98225. Gifts in her name are suggested to Bellingham Food Bank, Interfaith Coalition/Family Promise or Hospice House of Whatcom County.

The service will be broadcast live:https://www.facebook.com/pg/Hope-in-Christ-Church-...

To order memorial trees or send flowers to the family in memory of Aaltje (Ali) Laninga, please visit our flower store.